Vibrators are very much used by everyone around the world for getting satisfied and achieving powerful climaxes while having sex or otherwise.

They are great little tools that are used to achieve orgasms that you may not have experienced before.

In this article I am covering one of the strongest vibrators called Doxy massager.

The Doxy wand massager is very powerful and gives amazing climaxes and will give orgasm after orgasm. This is the strongest massager you will find for satisfying your sexual desires. 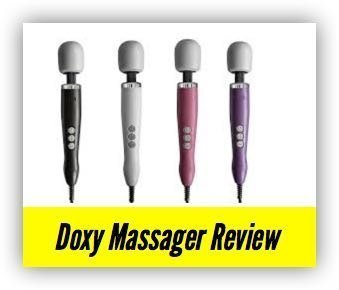 Vibrators are especially awesome for those who have either not orgasmed before or are just getting introduced to them, causing an instant rush of hormonal secretions which lets you focus on all the “turn-ons” rather than distracting your mind with the “turn-offs”.

In my career as a sex writer, I have had multiple interactions with women over time which have all echoed the same sentiment in chorus- “vibrators are a woman’s best friend!”

It is with good reason though, because as per psychological surveys, vibrators help you in a number of ways - you sleep better because of the orgasm you have, which then induces sleep hormones which makes you curl up in bed for a good night’s nap, whereas they also impact your mental health and happiness with the quick release of oxytocin and serotonin.

Using these sex toys also aided in building up confidence, with a few of the people I’ve interacted with, saying that it has helped them accept their bodies and be more aware of their own personal needs, which is such an important part of a healthy sexual experience.

In this article today, I am going to talk about another such great product, the Doxy Wand Massager which is making all the right moves in this highly tricky market and has won the hearts of enthusiasts the world over. Let’s get talking...

In the league of the world’s best vibrators, this wand massager from Doxy is like a breath of fresh air, with its impeccable design, superb functionality and the sheer simplicity of the process through which it lets you have some of the sexiest orgasms you’ll have ever experienced. Unlike a lot of its competitors which use hundred apps and integrations, the Doxy wand massager does only one thing, and it does it way better than its counterparts.

You simply have to plug it into the wall after which you’re all set to bring not just your clitoris but your entire vulva at that (and I am not erring in my judgement here, totally..).

It's heavy and built well enough so it really makes your self-pleasure sessions a little more sexy and a little more long-lasting. The wand massager is also compact in size, so you can carry it on your next work trip as well (wink, wink!)

The Doxy massager USA itself is very smooth and sleek, yet large in size. The entire Doxy wand extends a little more than 1 foot long, measuring a durable 516 grams.

The body of the Doxy wand is smooth and simple. All it comprises of are the controls (a power, increase, and decrease button) and the logo. Regardless of its straightforward structure, this certainly doesn't feel like an unsexy modern power tool. In some way or other it figures out how to have a touch of artfulness to it.

Be that as it may, there will be no obvious answer as to which is more powerful and have more vibrations. At this point all you can do is a take a blind taste to compare the power and the vibration of both the massager- the Doxy and the Magic Wand Original.

Although you might feel that the Doxy massager USA has more power than Magic Wand Original, both the massager will give you amazing orgasms when used.

The power that the Doxy massager can give is the best in class and you will not feel under-power at any time of the orgasms.

However, one thing that will be clear after prolonged usage of Doxy massager is that the vibration of the Doxy magic wand massager hits the right spot at each scenario.

Even though it’s not 100% thunder, the vibration of the Doxy wand when you use it for sexual pleasure will reach your clitoris and the G-Spot equally.

This massager will be your perfect buddy when it comes to orgasms and satisfying your sexual desires.

The Doxy massager does not make very high noises and it is usually very calm. There is no humming sound that can put off your sexual mood.

As compared to the Hitachi Magic Wand which was a noisy beast, this one is a bit more quieter and it's highly unlikely your neighbours would ever be disturbed with those weird noises from your room.

This Doxy wand is very powerful but is also very much calm and does not produce any sorts of noises when used.

Even at high speeds, the Doxy sex toy does not make any kind of noises but the speed and the movement cannot be ignored if you are trying to use the Doxy vibe discreetly.

Function of the Doxy Massage Wand

The Doxy wand massager is an amazing buy for those who are looking to have the most sweaty, kinky and body-shaking orgasms ever or have given a shot to the more powerful ones, only to come back to this supremely powerful and robust device which ensures all the aforementioned sensations in your body.

In comparison to the original Hitachi product, Doxy’s massager is 30% better, and allows more control in the frequency of the vibrations, which can be set from as low as 3,000 RPMs to a highly intense 9,000 RPMs with a flexible head made of PVC that hits all the right spots.

When you press the ‘Power’ button, the massager comes to life and can be operated at nearly full-strength. The Doxy sex toy literally purrs to life at about full power and strength.

If you are a sexual prowess and need to get down business quickly and immediately, then this is the best function for you. It is a powerful personal massager.

This is where it stands out from the rest of the massagers. For those more concerned about the frequency and desiring controlled vibrations, you simply gotta press the power button down a little bit for a few seconds and then choose the ‘+’ or ‘-’ button to set up the perfect pattern.

If you are feeling somewhat lazy and want to slow down things a little and savor the movement and the enjoyment, then you will need to decrease the speed and the power of the massager before you start using it.

Its power cord is nearly 3 metres long and comes with a UK, EU, US or AUS/NZ plug which can be plugged straight into the wall to get yourself started.

You can use a gel-based lubricant for more pleasure and move it against your clitoris in a circular motion, even as you experiment with different speeds on the dial and experience varied levels of arousals.

Doxy’s body is designed to fit comfortably in the user’s hand and uses polymer which remains unaffected by any kind of natural or man-made oils, ensuring an enjoyable time.

Material and Care of the Doxy Vibrators

Doxy wand claims that the head of the massager is produced using "hypoallergenic medical grade non-porous PVC that is free from latex or unwanted phthalates."

The head of this device is made up of hypoallergenic medical grade non-porous PVC that is free from latex or undesirable phthalates, with a head that’s softer than counterparts.

On the other hand, its lower body is a combination of plastic and aluminium materials, being Phthalate-free and non-porous (at least that’s what the company says!).

To keep it consummately clean, I'd propose that you cover it with a non-porous cover, for example, such as a plastic bag or a condom.

If you think that it is too much work, and then you can also use it over your panties, however it may be a hindrance in achieving powerful orgasms and satisfying your sexual desires. The PVC head of the Doxy wand can be something to fuss over with sex toy.

Structure of this wand is pretty simplistic and straightforward, but there is an air of artistic thought that has gone into the choice of colours and the overall user experience, which makes it a fan-favourite and the use of colours like Black, Pink, Purple & White adds to its desirability.

As per the company, since the head is made up of medical-grade, safety-first hypoallergenic PVC material, there is a high risk of it becoming a host for bacteria.

You must clean the head and device body post your session with an antibacterial wet wipe. It is advisable to turn off and unplug the product in between the sessions, so as to avoid any chances of electric shock, should the device come in contact with water.

To clean the head, you can wipe it with any kind of anti-bacterial wet-wipe. The same is with the ABS plastic body. Make certain to turn off and unplug your Doxy massager between your playtimes, since there's a danger of electric shock on the off chance that it comes into contact with water.

In case you will utilize lube to use the Doxy toy, I likewise propose water-based ointment.

The Doxy doesn't get any prizes for fancy bundling. It's a plain and straightforward white box, but the box is neatly packed and you have any complaints.

Inside the container, you will find the Doxy massager and an instruction manual. It would be better if the Doxy accompanied a storage pouch.

Even if it is a long fabric drawstring pouch, it would be awesome.

Since it is quite long as compared to the other traditional sex toys, you cannot put it in any of the pouches or the bags. You will have to keep the Doxy massager naked, stuffed into your drawers until the next time you use it.

Doxy’s packaging is also praiseworthy, since it keeps minimalism as its focal-point with a setup manual to get you started.

My Experience with the Doxy Massager

What's more, this affection for Doxy massager will be prompt. You won’t even need to mentor your clitoris to like the Doxy.

What's more, even though the massager is corded, the disadvantages are minimal. The Doxy's cable is 2.8 meters long, implying that you can connect it to an outlet that isn't right next to your bed.

A cable this long implies the Doxy stays flexible and usable regardless of the possibility that your bed is at a distance from the outlet.

What Do People Have To Say About It?

When I’m aroused, my clit usually feels a little bit wanky and oversensitive, no one can actually touch me. But with Doxy, it's so much more pleasurable and so COOL to use it again & again.

Spice Things Up A Lil’

You will be impressed with the Doxy Massager. It is solid, it is generally rumbly, and it is moderately calm.

The Doxy toy has a long cable. It comes in colors including pink and purple. The best part of the Doxy toy, however, is that it quickly delivers those climaxes.

If you’re looking for a device that keeps up with its promise to deliver pitch-perfect results, you may go ahead & buy a Doxy wand for yourself. Famous for its hair-raising orgasmic powers, this one shouldn’t disappoint you.