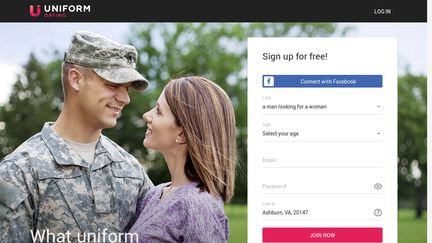 Uniform dating is a niche of dating website explicitly targeted at those who have a uniform duty.

Whether it be military personnel or a doctor, if you've got a uniform, this site is for you.

The website recognises the hectic work schedule of those who wear their uniforms, their lives bordering on anti-social, and makes dating and meeting people quicker and easier than ever.

This isn't just for the heroes themselves, but also for those who were looking for those heroes.

If you've ever wanted to meet our resident heroes in uniform and believe that they are your ideal partner, this is the site for you too!

Uniform Dating brings together the most attractive and accomplished men and women in uniform.

With its quick registration, easy to use the website and mobile app, there is nowhere else you're most likely to find the perfect match for yourself. It doesn't stop there. If you're not after true love, there's no harm.

The site encourages you to meet people, even if it is not romantically, just to socialize and leave your hectic work schedules behind for a while. After all, nobody deserves a little love more than our heroes in uniform!

Why is uniform Dating A niche site?

Uniform dating provides a service unlike any out there. It is one of the first websites to offer a dating service for those in uniforms of all kinds.

Dating sites for military personnel exist, so do traditional sites.

This particular dating site allows those people with hectic schedules to find their perfect match, be it somebody who understands them or somebody in the same or similar profession as them.

It provides them with security and tons of possible matches to choose from, customizing for location and interest.

It caters to the need for friendship and connection and not just for romance and love, and traditional sites cannot account for the unique needs of those in uniform, making uniform dating all the more special.

Uniform Dating has been around since 2004.

The website started independently before being bought out by Cupid PLC, expanding its user base and, therefore, the number of people available to meet.

The site caters specifically to uniformed singles, which are professions that involve long hours, hectic, possibly unpredictable schedules, and, most of all, that require you to wear a uniform.

From doctors and firefighters to military personnel, this site wants to bring them some love and happiness. It recognizes these people for the heroes that they are and want to bring them together with people who feel the same way.

So, if your dream is to meet someone in uniform and fall in love with them or simply celebrate them, this is the site for you! Often it can be said that nobody but those in this profession can understand the demands of the profession.

If that is the case, then meeting a person who has the same or similar work pressures and demands becomes very easy on this site. The registration process takes about five minutes in all, allowing you to start your search as quickly as possible.

The site has security measures such as Captcha to filter out the bot accounts that crop up on sites like this. There is also mandatory email verification before you can access the site and verification phone calls or CC verification done by the support team for security purposes.

Despite the measures taken, bot accounts slip past, and so do scam accounts. Reporting them to the support team is encouraged and leads to quick action. There is also a strict photo verification process.

All pictures uploaded to uniform dating are individually processed to make sure they are within the rules of the site. There is also a 'friends only setting,' which lets you broadcast pictures and information only to those you have put on your friends' list.

You can request photos from the person you are talking to, request audio as well, and meet them in secure locations to ensure that it is, in fact, a real person you are meeting.

There exists as well an auto-reply function on the messaging feature, which automatically messages the person for you when contacted.

The two million registered users have access to the flirt button, which can be used to make your intentions in starting a conversation extremely clear. This leads to no awkward encounters and possible rejections.

Apart from this handy feature, the site has not only a messaging feature but also a chat function and a live group chat room for multiple members. You can too woo fellow users by sending them 'winks' and 'gifts' while flirting with them.

If you aren't too sure about committing to a whole month or six, there is a three-day free trial for a nominal amount, which will undoubtedly entice you to invest for the long run.

The 2:1 male to female ratio and the staggering number of registered users is enough to ease our fears about finding that special someone. So, whether you're looking to be swept off your feet by the heroes, or somebody else who can understand how taxing it can be, uniform dating is the service for you!

While Uniform Dating does cater to a very specific section of people, it does not own the monopoly in this niche market. Sites like 'military cupid' and 'elite singles' offer you similar services.

Those in uniform can find partners who are in the same or similar professions as themselves. However, here's the issue, elite singles have an extremely lengthy personality test, and military cupid caters, especially to the armed forces.

Elite singles also only send you about 3 to 7 possible matches a day. This gives uniform dating an edge over the other sites. Your uniform doesn't necessarily have to be military, and you can look for possible matches per your preference.

The site doesn't restrict you in terms of location or number of favourites. It also understands the use of the site as a place to meet people.

The 'flirt' button allows for intentions to be made clear before you talk to someone, but if your intentions are more innocent, then there's space for that too! While its competitors genuinely have an idea, uniform dating is merely catering to a particular need.

Uniform dating offers three packages. The packages are incredibly affordable. There is a one month, three months, and a six-month package. The packages look like:

It can be paid through credit card but is not available to be paid in installments.

The support team for uniform dating is readily available over a phone call and email to answer all your queries. Whether it is regarding billing or spam accounts, the team is quick and to-the- point with their responses.

They can be contacted on the following:

For those in uniform have hectic schedules, and work hours so long, social lives are practically non-existent for them, Uniform dating is a necessity.

Uniform dating allows them to find not only possible love but friends as well. They can find people who can understand and relate to their excessively busy schedules, the emergencies, the work hours.

They can also find people who are willing to work with the same. It makes dating look easy! The security measures the site takes are impressive.

With most of its users working in sensitive professions, it only serves that their information is well protected. From their email addresses to their pictures, all data is carefully stored, secured, and filtered through.

Security measures like Captcha and email verification calls try to keep the bot accounts and scam accounts minimum as much as possible. Still, the few that get through can be recognized through the lack of information on their profiles, even if most members' profiles are without pictures.

It also offers several modes of communication from 'winks' and 'flirts' to live group chat rooms. Best of all, it is affordable! Not just the three-day trial but the subscriptions are not absurdly priced but are reasonable.

They allow you to access a range of features that will help you meet more people, flirt with more people, and hopefully find more love. To make it all the more accessible, the mobile app exists on both iOS and Android.

You can create account, upload pictures, message, chat, send gifts, and much more through the app as well! To us, uniform dating is worth it. The nominal price will all seem worth it when you find your needs finally being catered to on an easy to use, convenient platform.

Uniform dating is the site to use, not only if you're a hero looking for another hero to bet by your side, but if you're looking for your hero!

We hope you enjoyed reading about the key features of the dating service uniform dating. As one of the only sites that cater to those in uniform, we hope you can appreciate the features and services just as much as we did.

The internet has a few more reviews you can read on the same to get a better idea of the site itself. If you would like us to review any more such dating sites, do let us know, we'd be happy to do so! Till then, it's time to find yourself a hero!