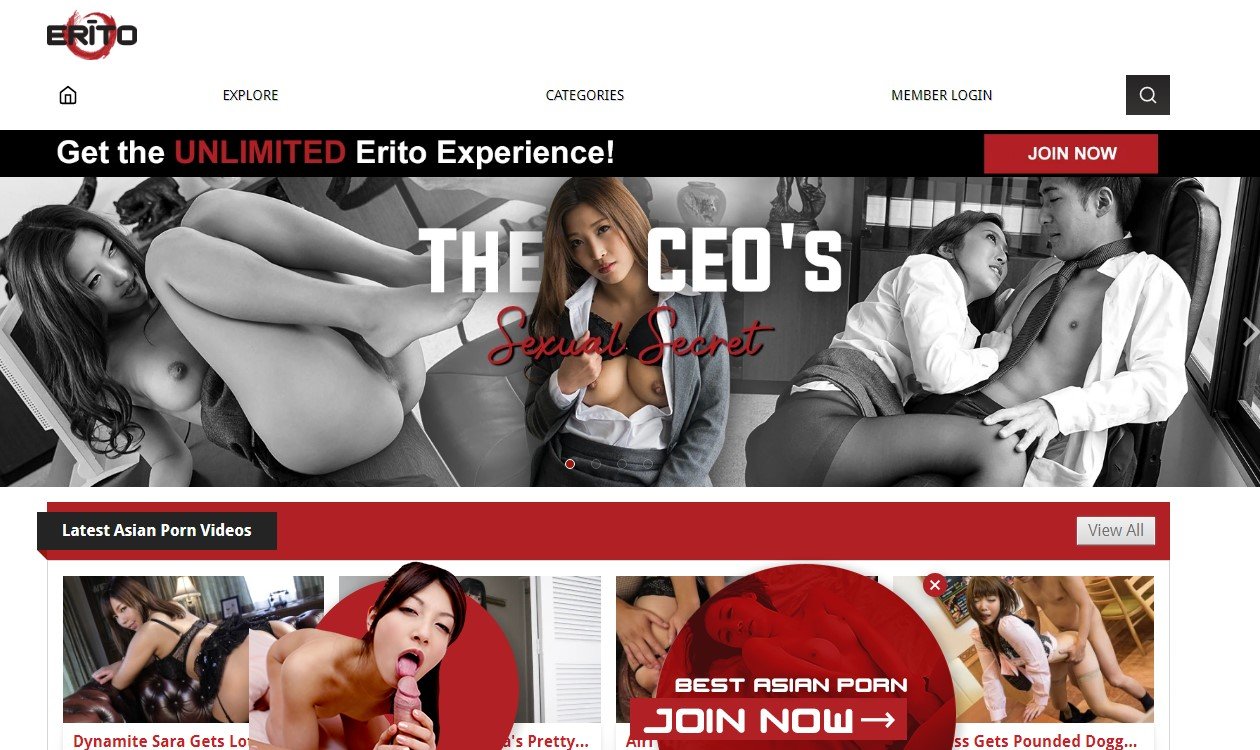 However, there are some major issues that bug this website.

The most prominent of them is the extra charge applicable for downloading, which might make accessing this website an expensive affair.

But besides that, it is a fun and enjoyable website.

Moreover, it does provide uncensored content which is pretty unique as most other websites of the same niche don’t.

Japanese women are probably one of the hottest in Asia, replete with a lot of grace and beauty, along with being soft yet delicate, and sometimes being dominant yet submissive. These are attributes why they usually smite many men from the West or even Europe.

Erito, which was founded back in 2013, has in the last few years, ensured that its users get the best of kinky fun from Japan in an uncensored, highly delightful manner.

When you access the site for the first time, its homepage presents users a collection of videos, right from the newest ones that have just been uploaded within a space of a few days, to the most popular ones which, though old, are like hidden gems you often tend to ignore.

The quality of these videos and the sheer joy of watching diminutive women from the Far East displaying some of their hottest kinks on camera, bring alive the fantasy of many men.

Unlike a lot of other sites, Erito features a database that’s surprisingly composed entirely of HD videos that don’t just turn you on but are also a treat to your eyes. There’s also a touch of some fun POV action which helps you look at things a little up-close.

Whether you are looking for a mature, big-titted older woman or a shy young teen, Erito’s video database features a lot of variety. You should not be surprised if you see women wearing revealing and bizarre costumes as there’s a lot of cosplay too going on in here.

These women can be hairy or even shaved, thus offering you a lot of spices on a single platform.

Why is Erito a better option than other similar sites?

They source their content from a mix of five Japanese AV sites which include – MILFs in Japan, Teens of Tokyo, Cosplay in Japan, Japan’s Tiniest and Erito’s AV Stars, which include everything from hot MILFs, to unique cosplay action and even the most delicate yet deliciously sexy teens.

Compare it with the likes of competing sites such as Futanari Sluts, The BlackAlley, AsianSexDiary among others, one area they score well above others is as mentioned before, the fact that they’re all uncensored.

Navigation is easy and intuitive, and their site’s design is pretty decent, if not extraordinarily aesthetic. The site’s load speed is pretty decent, and the playback too is good enough to have a watching session, sans any glitches or loading problems.

They have an entire collection of videos belonging to different genres and varieties.

What’s even better is that in spite of there being no advanced search feature separately, the content has been distributed tidily amongst different tabs such as ‘Scenes’, ‘Sites & Niches’, Categories & Tags and Models, which makes finding content that’s relevant to you in an easy, fuss-free manner.

You can even mark scenes in a video to watch it later, and you can jump ahead in the video without having to wait for it to buffer. Lastly, what makes it even better is the fact that there’s a mobile version as well.

Back in the day, Erito used to feature a large collection of videos that were well above 3,700 in number, and the list of models/performers on the site was also way more than what it is currently.

But at the moment, the number of videos is in the 100s, and the same is the case with the number of models who perform on the site.

One look at the site’s video collection these days, and you can figure out that a major chunk of its content was either purged or shuffled recently, which has brought down the quantity on the site down quite considerably.

Talking about the video library on the site, it currently has about 339 videos that feature a large variety of sex positions and fetishes among others, with a major chunk of these videos being full HD in viewing quality, which adds to the overall watching experience on this site.

Scenes can be sorted by filters such as Latest, Upcoming, Date Released, Title, Most Liked and Most Viewed, apart from Random Scene among others, to give you a fair idea of what you would be desirous of watching.

Some of the scenes also give you a short description, accompanied by the date of their release and hyper-links to cast information, location information, the category the video belongs to and related videos. There are no live cam sessions, which could be a deal-breaker for some of the users.

The navigation and UI lastly, are pretty decent and would provide for a fuss-free browsing experience, without having to go through dozens of tabs to access something that could be found with just one single click.

That said, their pricing plans are as follows -

They say you could figure out how much importance a brand places on its customer’s needs by talking to their support/customer experience team. As per a few users online, who have availed Erito’s subscription, their experience hasn’t been smooth.

There are also questions about the seriousness of the business in listening to their customers’ needs and grievances. Nonetheless, you can get in touch with their support team here -

With a lack of viewing options, basic details and the need to pay extra for downloading videos is something that proves to be a deal-breaker in its case.

The website surely needs to look into their design as well as pagination so that it can justify the pricing and what all they’re offering under those membership plans.

Covered above were some of the pros and cons of the popular, premium Japanese AV site Erito.com. We hope that the review was entertaining and helpful to our readers, and we wish to hear a lot more from you to improve on our reviews and make them more informative and useful for you!

Do get in touch with us and help us make your browsing experience with us even more amazing! Cheers!